You are here: Home / TV / Binge-Worthy: The Last Ship

Welcome back to Binge-Worthy, my ongoing series that tells you what TV shows you should be watching on your favorite streaming services. Last time, I gave you my reasons to give the country music stylings of Nashville a try. This time, we are going to to take a look at something quite a bit darker…

Nothing says “Drama” like a life-or-death-struggle following the end of the world! However, maybe you’d like your post-apocalyptic tales to include less flesh eating corpses and more of Eric Dane (Grey’s Anatomy, Charmed) captaining a US Navy vessel? Then The Last Ship may just be for you!

Dane plays Commander Tom Chandler, Commanding Officer of the USS Nathan James. Chandler and his Executive Officer, Commander Mike Slattery (Adam Baldwin of Firefly and Full Metal Jacket), believe they are escorting “zoologist” Dr. Rachel Scott (Rhona Mitra of Shooter and The Practice) on a research mission while the James and her crew participate in a series of incommunicado war games. When a Russian attack helicopter fires on Dr. Scott and her colleague, she is forced to tell Chandler and the entire crew the truth: the world has been ravaged by a terrible virus and most of humanity is dead or dying. Scott’s true mission has been to discover a cure, using the James as her base of operations; the war games were a ruse to keep the ship quiet and hidden from the rest of the world in hopes that the cure could be found. 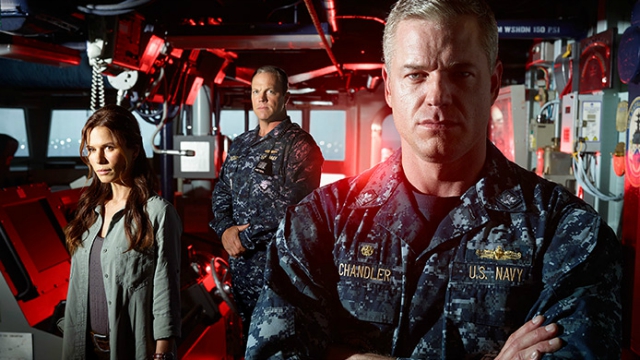 Now, without knowing if their loved ones are alive or dead, Chandler and the crew must protect Dr. Scott as she attempts to find a vaccine for the deadliest disease the world has ever seen. Along the way, the James, the last remaining ship in the US Navy, will meet new allies… and new enemies. Chandler and crew will bear witness to both the best of humanity and its darkest urges. And, in a time when mankind should rally together, the James will be rocked by betrayal from within and without.

Season 2 of The Last Ship is currently airing on TNT every Sunday night and is available on digital outlets such as iTunes, Amazon Instant Video, and Google Play. If you need to catch up on season 1, it is available to stream in its entirety on Hulu!

If you’ve never tried Hulu before, binge-watching The Last Ship is a great reason to start! Just click here and you can get a two week free trial!