If you follow me on Instagram or Twitter, you probably know how horrible my Internet speeds have been this past week. When most of your movie collection is digital, this makes watching movies a tad bit difficult. I was afraid that my Summer 2015 Movie-A-Day Challenge was over before it started!

Fortunately, I had enough films gathering dust on Blu-Ray to watch early in the week and the stars aligned and my connection finally cleared by the weekend, allowing me to complete week one! So, without further ado, I give you a recap and my thoughts on week one of my Summer 2015 Movie-A-Day Challenge! 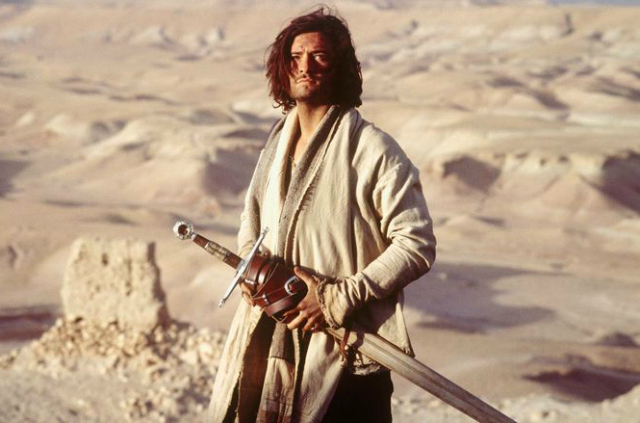 I’d been waiting for an excuse to sit down to this historical epic for a long time now since I’m a huge fan of Ridley Scott’s work and I find the Crusades fascinating. Orlando Bloom gives a remarkably intense performance, demanding the audience’s attention, while the supporting cast (especially Edward Norton) puts in admirable performances. Battles are appropriately grand and bloody.

Unfortunately, the plot moves too quickly at times while moving too slowly at others. Interesting characters are introduced only to be killed moments later or forgotten entirely.

Ultimately, Kingdom of Heaven is a decent way to spend an afternoon or an evening, but it is not as great as it could have been. Although, I must give the writers and director credit for not sugar coating the actions of either side of this dark chapter in human history. 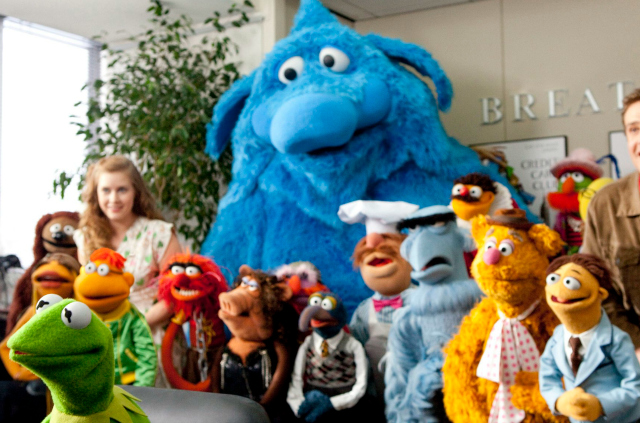 I’ve long been a casual fan of The Muppets, so I was interested in seeing Disney’s take on Jim Henson’s lovable puppet characters. The Muppets was quite enjoyable, although rough in a few places. There are more than a few scenes that are downright cringeworthy (especially in the beginning), but once the original cast of Kermit, Fozzie, and gang get involved the movie makes a turn for the better. It never outdoes the “good ol’ days,” but comes close enough.

Completely silly and not for the deeply serious, The Muppets is perfect watching for a family movie night. 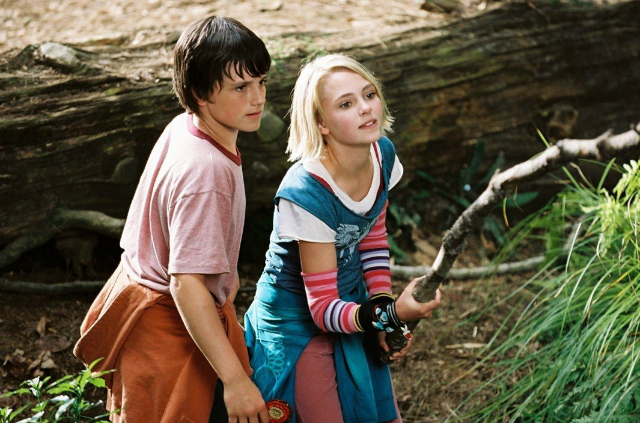 The wife had long sung the praises of Bridge to Terabithia from the many times she watched it while working at a day camp. While I agree that Terabithia does strike a resonating emotional chord, I felt that the plot moved far too quickly in some places, seeming as though important scenes were cut out at the last second.

However, the story is serviceable enough and stands as a testament to the importance of imagination. Bridge to Terabithia can also be seen as a way to introduce kids to the notion that while grieving is needed following a tragedy we must not let ourselves be controlled by grief. If for nothing else, The Hunger Games fans may want to watch to see a young Josh Hutcherson run through a forest dodging monsters long before Peeta Mellark would do so as a representative of District 12. 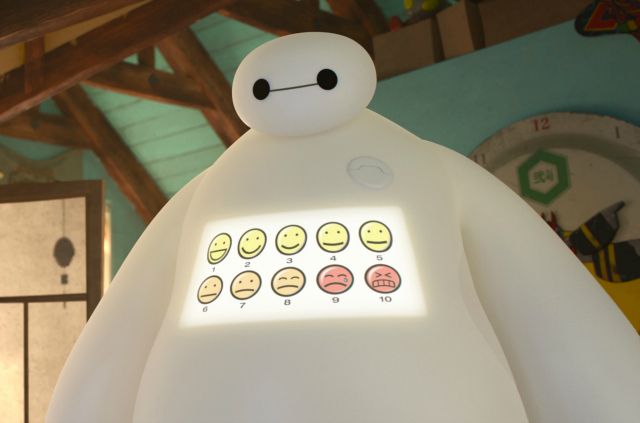 Disney has always been a favorite of mine, so I was excited to finally see Big Hero 6, the first time the House of Mouse had adapted a Marvel property into a more traditional animated film. While the film was a lot of fun to watch (many laugh out loud moments) and strummed that same emotional chord that Bridge to Terabithia played so well, it too suffered from pacing issues.

One moment, Hiro is being introduced to a group of brilliant college students. Immediately following this introduction, these students are willing to drop everything to help him develop what amounts to a large-scale science project merely because he is their friend’s brother. Shortly thereafter, the students are ready to become super heroes at Hiro’s whim.

Happily, those pacing issues do not undo the many heartfelt laughs and sobs I experienced while watching Big Hero 6. I foresee watching this new Disney classic many times in the years to come. Anyone would be wise to include this family friendly hit in their collection. 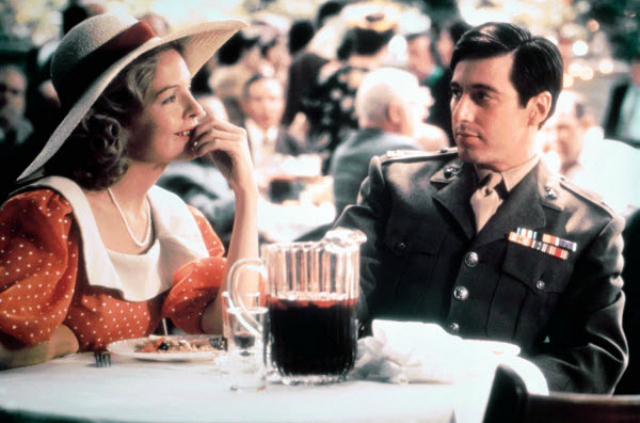 As I said in my introduction post, The Godfather was one of the big reasons I wanted to do the Summer 2015 Movie-A-Day Challenge. I wanted to finally see the film that many call the greatest of all-time for myself. Now I understand why Francis Ford Coppola’s classic is held in such high regard.

This twisted American fairy tale is nothing short of amazing. Marlon Brando, Al Pacino, Robert Duvall, and James Caan all put in the performance of a lifetime. The cinematography was beautiful. The story is one of both triumph and tragedy in equal measure; a tale of rising into power while falling into corruption.

Honestly, there is nothing that I can say that hasn’t already been said thousands of times before. So, instead of getting in depth and gushy, I’ll simply suggest those who have not seen The Godfather before should rectify that immediately. 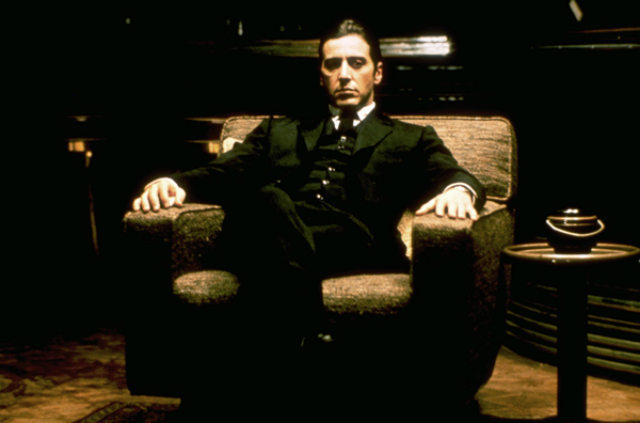 After being so thrilled with The Godfather, I knew I had to watch its sequels the following two nights. I was most excited for The Godfather, Part II, a film some call “the greatest sequel ever.” Sadly, I’m afraid it was (to me) the most overrated sequel ever.

Don’t get me wrong: The Godfather, Part II is a very good film. Al Pacino is just as amazing as before as Michael Corleone, as is Robert Duvall as Tom Hagen. Robert DeNiro as Vito Corleone was most impressive, especially considering that the actor would inevitably be compared to Brando. The cinematography was on par, if not better, with its predecessor.

Sadly, it was the plot of The Godfather, Part II that I found lacking. I enjoyed the flashbacks and learning the Corleone family history, especially seeing how Vito’s need for revenge parallels Michael’s own, but many of Michael’s scenes needed to be trimmed. Far too much time was spent on fluff, such as the passing around of the golden telephone. The worst offender is the Senate hearings. There was no reason for those portions to go on as long as they did.

If The Godfather, Part II had undergone just a little more editing, it would have been an excellent film. Instead, it settles for very good. 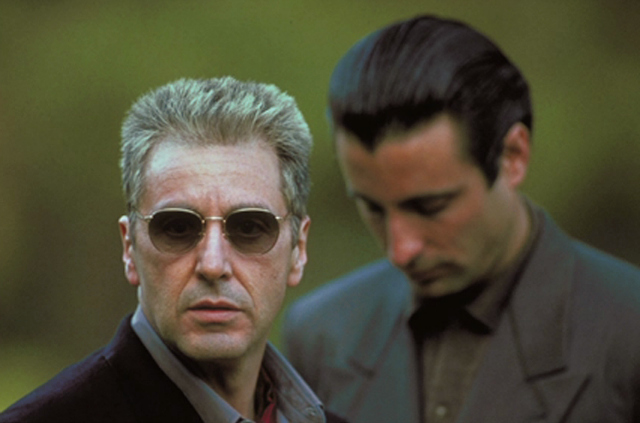 I went into The Godfather, Part III more than a little apprehensively. Not only had I been (slightly) disappointed with Part II, I also knew that this was considered the worst of the entire trilogy with some calling it a downright abomination. Luckily, I was pleasantly surprised by Part III. It is assuredly the lesser of the three films, but it is in no way a bad movie.

Al Pacino doesn’t have the same sinister magic that he had in previous installments, but he is still excellent as a Michael Corleone that is desperately seeking redemption. Talia Shire, while good in her limited role in the previous two films, really shines in this one as a sort of “Godmother” role. Yes, Sofia Coppola is just as bad as everyone always said she was, but the rest of the cast is serviceable, although Robert Duvall’s absence is really felt as the movie goes on. The cinematography isn’t quite as good as the previous two films either, but that likely has to do more with the sharper images as of a result of better technology since Part III was filmed almost twenty years after Part II.

Really, the biggest issue is, again, the story. The concept is interesting: a crime lord attempts to find redemption for the sake of his children and his family’s legacy while being pulled back into the “business.” Unfortunately, the concept is lost in a sort of convoluted mess that just muddles about for much of the film. Fortunately, the narrative is salvaged by a gut-punch of an ending that gives Michael a sad and appropriate end.

So that’s it for my first week of the Summer 2015 Movie-A-Day Challenge! Why did you think of my choices and/or opinions about them? Have movies you’d like to suggest for week two and beyond? Tell me in the comments, on Twitter, on Facebook, or on Instagram!

This site uses Akismet to reduce spam. Learn how your comment data is processed.