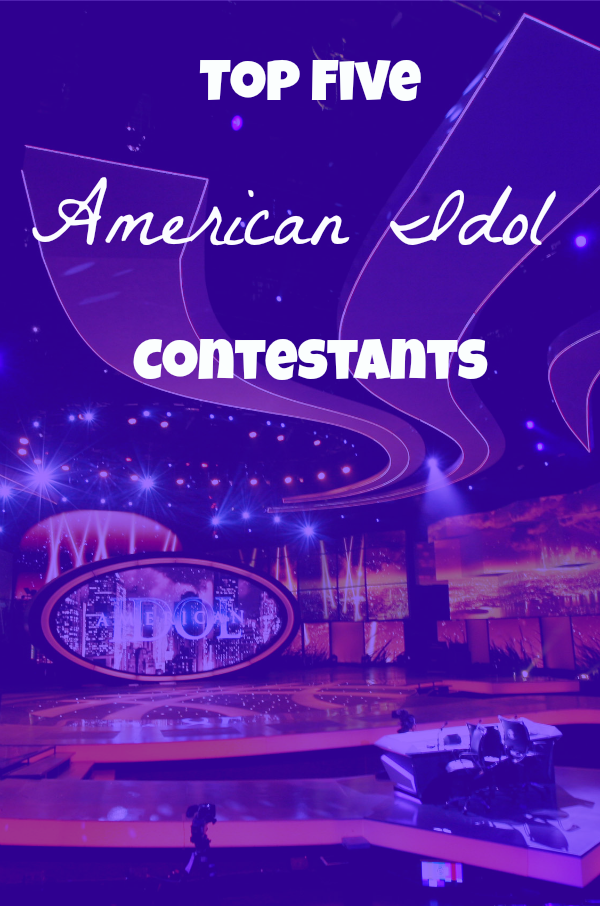 On Monday, it was announced that Fox would be canceling ratings juggernaut American Idol after its next season, the shows fifteenth. While some may question the legitimacy of Idol‘s voting and others will forever call it a glorified karaoke competition, few can doubt the effect the show has had on the entertainment industry. Idol unleashed the beast known as Ryan Seacrest upon the world, inspired other singing competitions, and actually managed to expose us to legitimate musical talent.

Today, in honor of the soon-to-be-dearly-departed show, I’m counting off what I consider to be the five best contestants of American Idol‘s incredible run. These are just my choices and do not reflect a professional opinion at all. I would love to hear your opinions in the comments below.

Without further ado, I present for your entertainment…

One of the biggest upsets in the history of American Idol occurred when Adam Lambert finished in second place to Kris Allen during the eighth season of the show. Fortunately, Lambert has done just fine for himself since that “disappointment.”

His debut album, For Your Entertainment, debuted at #3 on the Billboard Hot 200 album charts and has been certified gold in the United States, along with reaching platinum status internationally. Multiple singles from album, specifically “Whataya Want From Me”, charted high in the Billboard singles charts. Lambert’s second album, Trespassing, debuted at #1 on the album charts, making this Idol the first openly gay artist to earn that distinction.

As if that wasn’t enough, Lambert has become the de facto frontman for one of the biggest rock bands in the world, Queen. Queen + Adam Lambert performed a string of sold out concerts throughout 2014 and were named the “band of the year” at the Classic Rock Roll of Honour Awards.

In the meantime, Lambert has made guest acting appearances on shows such as Glee and Pretty Little Liars and is preparing to release another studio album. The first single off this latest album, “Ghost Town”, hit #1 on the iTunes Pop charts shortly after release. Who said second place is just the first loser?

Practically anointed the winner of American Idol‘s fifth season early in the competition, viewers were stunned when Chris Daughtry was eliminated in fourth place, denying the rocker a podium position finish. However, in a season that saw many finalists (and even semi-finalists) receive record deals, Daughtry has risen above them all as the lead singer of a rock band that bears his name.

The band’s debut album, also called Daughtry, hit #1 on the Billboard Hot 200 and Rock album charts and was the top selling album of 2007. It has sold over five million copies and has been certified platinum multiple times. Daughtry spawned several successful singles, including “Feels Like Tonight” and “Home”, which served as the song played when a contestant was voted off during season six of Idol.

Not content with one #1 album, Daughtry’s second studio album, Leave This Town, also topped the Billboard Hot 200 and Rock charts, making the 4th place finisher the first Idol contestant to have back-to-back albums reach the top of the charts. Like Daughtry, Leave This Town also had its fair share of hit singles, including “No Surprise” and “September”, and was certified platinum.

While the band’s subsequent albums, Break the Spell and Baptized, have not met the commercial success of the first two, they nonetheless have also been top ten albums, cementing Chris Daughtry as one of the most successful contestants in Idol history.

Next, we move down the list for a contestant that didn’t even break the top five…

While her albums haven’t sold quite as well as Daughtry’s has and she doesn’t front a legendary rock band like Lambert, Jennifer Hudson has done quite well for herself despite being voted out seventh during season 3 of American Idol. Her self-titled debut album hit #2 on the Billboard 200 and R&B charts, has been certified gold, and earned her a Grammy for “Best R&B Album.” Hudson’s followup album, I Remember Me, would also reach #2 on bith the Billboard 200 and R&B chart before being certified gold. However, it is something other than her chart performances that she has become known for.

Hudson famously won the Academy Award for Best Actress in a Supporting Role for her take on Effie White in the film adaptation of the musical Dreamgirls, a role that she competed for against eventual Idol season 3 winner Fantasia Barrino. Hudson’s amazing vocal performance on “And I’m Telling You I’m Not Going” propelled her to the Oscar, making this Idol “also ran” one of only a very few to win such an award in their acting debut. Not only did Hudson nab the Oscar, she also brought home a Golden Globe, Screen Actors Guild award, and BAFTA as well.

Since Dreamgirls, Hudson has continued acting and has appeared in such films as Sex and the City, The Secret Life of Bees, and Winnie Mandela. In addition, she has made numerous television guest spots, most recently on the hit Fox drama Empire. She has also managed to release a third album, JHUD, which hit #10 on the top 200 charts list.

Now take a moment, catch your breath, and let’s talk about the top artist in American Idol history….

The original Idol winner is still the best the competition has had to offer. Kelly Clarkson has proven an incredibly popular crossover artist. While solidly a pop artist during the show, the original American Idol has managed to chart on both the Billboard pop and country charts, even reaching the top of the Hot 100 charts on multiple occasions. Clarkson has had the opportunity to perform with country heavyweights like Reba, Trisha Yearwood, Jason Aldean, and Martina McBride, all the while still maintaining her “mainstream cred.”

The versatile singer has released six studio albums, five of which have gone on to be certified multiple times platinum (and the sixth, released in February, may still do so). Clarkson has been so well received that even her Christmas album, Wrapped in Red, went platinum. Her impressive album sales, combined with her staggering singles sales, have made Clarkson the top selling artist in the show’s history.

Most impressively, Clarkson was never shown on Idol until “Hollywood Week,” her audition never making air. She did not have the same opportunity to make a connection with the viewing audience that other artists did, specifically judge’s darling Tamyra Gray. Clarkson’s victory is ultimately a testament to her voice and performance ability rather than the sort of anointing process other winners have undergone during their season.

So there’s my list! Do you agree? Disagree? Have any favorite American Idol memories to share? Be sure to leave them in the comments below.