You are here: Home / Books / Lords of the Sith by Paul S. Kemp 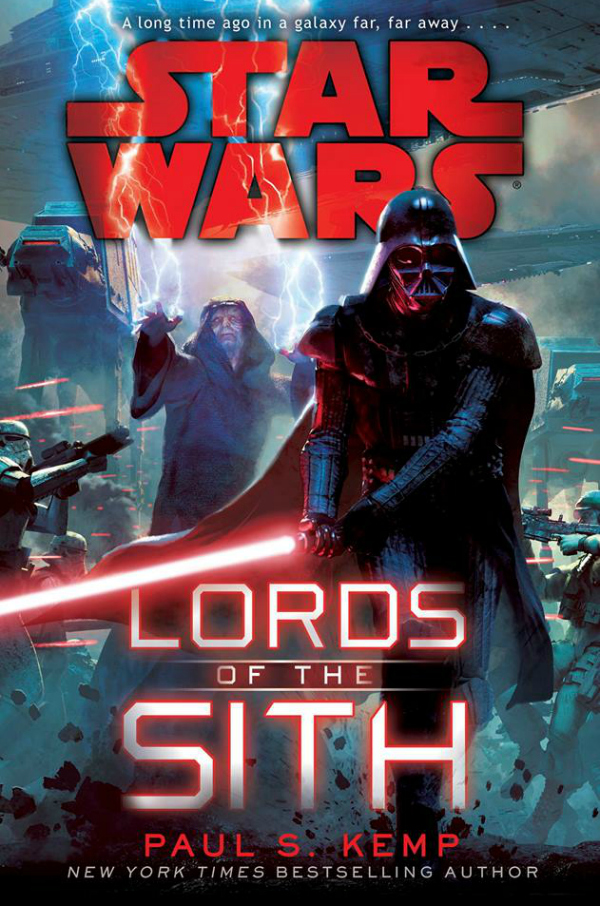 Star Wars: Lords of the Sith by Paul S. Kemp

Paul S. Kemp lives and works in Grosse Pointe, Michigan, with his wife, children, and a couple of cats.

*Author bio taken from Lords of the Sith “About the Author” page; Author photo from Twitter*

When the Emperor and his notorious apprentice, Darth Vader, find themselves stranded in the middle of insurgent action on an inhospitable planet, they must rely on each other, the Force, and their own ruthlessness to prevail.

Writing for one of the most iconic characters not only in the Star Wars mythos but in all of cinema must be an intimidating task. Luckily, Paul S. Kemp has proven himself mostly up to the challenge. In Lords of the Sith, Kemp reminds readers just how much of an all-powerful menace Darth Vader has always been while showing that the heart of Anakin Skywalker still beats inside that black armor. Unfortunately, this book suffers from more than one disturbance in the Force.

Set several years before Episode IV: A New Hope, Lords of the Sith delves further into the relationship between Darth Vader and his Sith Master, Emperor Palpatine. Since the films show Palpatine being a father figure to Anakin one minute and then almost immediately shift to the “Yes, my Master” dynamic, seeing the Sith “training” process that Vader is subjected to is something new for fans. Kemp does an admirable job of confirming and reshaping some of the assumptions readers may have had about this relationship. Witnessing the mental anguish that Vader must endure as the feelings of Anakin Skywalker try to push their way through all the while they are being scoured away by Palpatine’s mind games is a particularly powerful experience.

While it is interesting to see the adventures of Vader and Palpatine in print, Lords of the Sith never feels as important as other entries in the new Star Wars canon. Going in, readers know these characters’ fates; no matter what danger they are said to be in, it can never be a seen as a serious threat. The entire time the Sith duo is being hunted by a group of Twi’lek freedom fighters, everyone knows it is just a matter of time before the entire group is slaughtered by Imperial forces. In truth, the entire central plot is nothing but a device to expand the legend of Darth Vader and his Master. However, it is a somewhat effective device.

Vader’s abilities are on full display in Lords of the Sith. If anyone ever questioned how the whole galaxy could fear Lord Vader after seeing what kind of whiner Anakin was in the prequels, this book answers the question with an exclamation point. Some of the action does border on fan-fiction early on, but it is all in good fun and keeps with the feel of the franchise.

What isn’t in good fun is the slow start Lords of the Sith has. It takes almost a full 20% of the book to get going due to new character introductions and some stiff dialogue, especially between Vader and Palpatine. However, it never gets too bad and those who continue on will be rewarded by seeing the aforementioned Master/apprentice relationship unfold.

The biggest disappointment comes from a wasted opportunity. One of the Twi’lek freedom fighters is a former slave who goes into the Ryloth (the Twi’lek home world and setting for Lords of the Sith) underworld, killing Imperial officers and freeing other slaves. It is an interesting subplot and something that hasn’t really been done in a Star Wars novel before. In fact, the idea is probably worthy of its own book. Sadly, the plot is dropped after one half chapter and only briefly brought up again.

It needs to be said that Lords of the Sith is not for young Star Wars fans. There are multiple scenes that feature copious amounts of gore, ichor, beheadings, and other descriptions that could cause parents to squirm. This doesn’t even account for the suggested drug use and the insinuation that Twi’lek females are being sold as sex slaves. If you think your child might be interested in this book, I would at least suggest a pre-read.

Lords of the Sith is far from a bad book. It goes a long way in filling in some of the gaps of the Vader/Palpatine bond and needs to be read by fans of the franchise, especially those who like Darth Vader. However, a beginning that drags and missed plot opportunities keep me from placing it on the same level as its predecessor, Heir to the Jedi. In the end, the Force is strong with this one, but it is not a Jedi… I mean Sith, yet.

Note: I received an advance copy of this book for review purposes. I was not compensated in any other way. All opinions are my own.